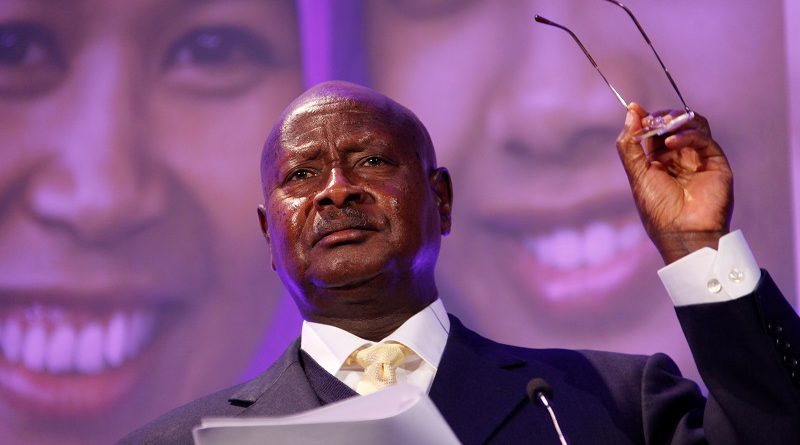 Written while at the Uganda peace talks in Nairobi, this is a profile of Yoweri Museveni. A rebel leader at the time in 1986, he remains Uganda’s president. Originally this appeared in New African magazine in March 1986.

“Mr Museveni is it true that you are demanding the position of Chairman of the Military Council from Okello and want to become president?” asked a journalist. Museveni smiled his ‘knowing’smile, tilted his balding head to the side and peered through the Vis-News camera spotlight. “What’s wrong with that?” he answered.

Thirteen days later he had signed the ill-fated peace agreement with the Okello Government in Nairobi and after another 43 days Yoweri Museveni was sworn in as Uganda’s President. His National Resistance Army had won – routing Okello’s rag-tag UNLA and the ruthless Anyana, the ex-Amin men.

Born in 1944 or 1945, he’s not sure himself, Museveni spent most of his life involved in a war against someone.

Now he has cultivated the image of the image of the sincere idealist, the “intellectual whp picked up a gun” as he once said. But this Ankole tribesman, born in a place called Ntugamu some 40 miles from Mbarara, is much more than an idealist intellectual who believes in nationalism, pan-Africanism and development. He is politically shrewd. His intuition when in government allowed as many political escapes as he had from death — which led many to say he had magical powers.

Nowhere was his political keeness more obvious than during the protracted peace talks in Nairobi. His high-profile and well-organised press conferences contrasted with Lt. General Tito Okello’s absence and the Military Council’s poor press relations.

In the final weeks of the talks he was calling for the prosecution of all those involved in war attrocities, pointing out that most of the Military Council had been in government during Obote’s bloody reign.

Everyone somehow forgot that Museveni had fought with Tito Okello and Oyite Ojok (who was later Obote’s Chief of Defence Forces) in 1979 to overthrow Idi Amin. Museveni maintains that his group and Obote’s were separate. No-one mentioned that he had been in government when President Lule had been forced to resign or that he had worked with Paul Muwanga (later Obote’s Vice President) and Tito Okello in overthrowing President Binaisa.

Yoweri Museveni studied at the University of Dar es Salaam in Tanzania, where he embroiled himself in African liberation politics. There, he did publicity work for the Mozambique Frelimo movement who were then fighting the Portuguese. He also visited Fretimo liberated areas, learning guerrilla warfare.

On graduating in 1970 he joined President Obote’s office as an Assistant Secretary for Research. With the coup that put Amin in power, he fled to Mozambique where he set about training an army. In 1972 he joined with Obote for their first and unsuccessful invasion.By 1979 Museveni’s Fronsa (the Front for National Salvation) had about 9,000 soldiers and once again he agreed to join with Obote’s UPC (Uganda People’s Congress) forces and fight Amin. This time they succeeded and Yusufu Lule, seen as “neutral” by Obote and Museveni, became President.

Although Museveni became a senior member of the Military Commission and Minister for Defence in the new government, Obote had remained in Tanzania. It turned out his “corner” was being looked after by Paulo Muwaanga, the Minister for Internal Affairs. Pressure from Muwaanga and Binaisa (for different reasons) forced Lule to resign, making Binaisa President. But Museveni’s position hadn’t changed, in fact at first it seemed to strengthen. He acted as Head of State when Binaisa was abroad.

It didn’t last, however, and with UPC members whispering that Museveni was after the President’s “sweet chair”, Museveni was demoted to Minister for Regional Co-operation. Down with him fell Muwaanga to Minister for Labour and pressure increased on General Oyite Ojok, a Lango like Obote.

These were powerful enemies to make and within a short time Binaisa was overthrown by Muwaanga, Ojok and Okello, allowing Oboteto return to Uganda. It was rumoured that Museveni had helped Muwaanga to get rid of Binaisa. What is certain is that he remained for the 1980 elections.

Muwaanga had unsubtly fixed the elections to allow the UPC to gain most seats and return Obote to the presidency. Museveni and his Uganda Patriotic Movement only gained one seat and Museveni lost in his own constituency. He claimed it had been gerrymandered but sources close to the Democratic Party, who also lost to the UPC, said it had been one of the few that wasn’t.

With Obote back in power Museveni returned to the bush in 1981 and began a war of guerrilla attrition. His non-smoking, non-drinking, Protestant work ethic moulded a formidable group of guerillas in a short time, although some believe that much of the early National Resistance Army was made up of planned remnants of Fronsa,

His gifted military ability, gained from Frelimo and the textbooks of Mao and Clausewitz, brought one victory after another. His belief in a people’s war rather than a coup, gave him loyal grass-roots support, they agreed with his public sentiment that the aim of the NRA was “dignity for the African people”.

It is perhaps this aim that gives the best insight into Museveni. He waged a war to produce a government that “respects the people”and the NRA’s strictly disciplined soldiers showed that respect. But Museveni also knew that to gain power and develop Uganda, he needed some strange bedfellows. Some observers believe that he was backed by millionaire entrepreneur Tiny Rowlands, while much of his weaponry is said to come from Libya, once Amin’s staunch ally.

Similarly, in redeveloping Uganda’s abused and neglected economy, he accepts that Marxism isn’t the answer and advocates a mixed economy. Already he has said that Uganda counts upon the goodwill of the international community to assist it.